As much as I am a morning person, there are those moments between waking up and being up that I want nothing more than to not get up. This morning, it was after a few grumbles that I hoisted myself out of bed, shuffling my inflamed feet to Kona's crate.  Kona poked me with her nose as I stretched on the floor next to her.  With a few more grunts, I remember what I woke up for.  It was morning, a new day, a new chance to seize the day. 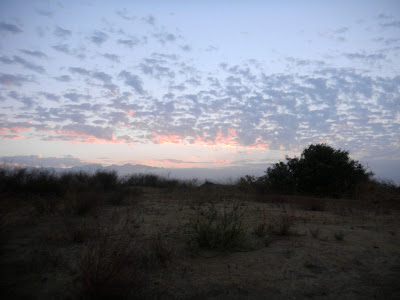 It was a week ago today that we learned of a friend's crossing.  K was a kindred mountain spirit.  I treasured reading about her adventures with her humans, KB and the Runner, and her Labrabro, R.  Her passing has been grieved by the blogging community, though it is her life and spirit that we will all carry longer still. 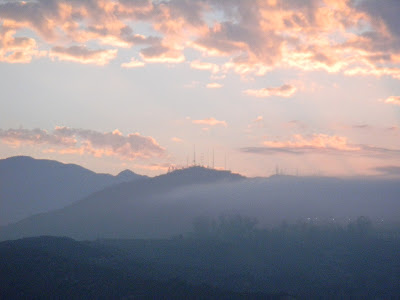 Kona and I trotted into the morning.  The air held a crispness unusual for Summer that eased my legs and lungs into the day's run.  Clouds dotted the sky in pastel designs and I couldn't help but smile. 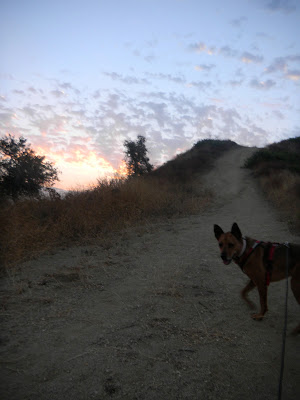 As we approached a series of steep climbs, a breeze kicked up at our backs.  Kona peered back at me.  We took off up the first hill.  I turned my feet over like I was running over hot coals, swinging my arms to propel me upwards.  Kona's trot turned into a gallop.  At the top of the first hill, my legs burned like wasabi, and all I could do was smile.  We sprinted up the second hill, then the third.  At the top of the last climb, I slumped over into a full tripod, gasping for air and begging for mercy from the acid that churned in my legs.  Kona looked over at me.  Her tongue hung out of her mouth and her eyes sparkled with glee.  The breeze kicked over our backs and I smiled again, thanking K for her reminder to seize the moment. 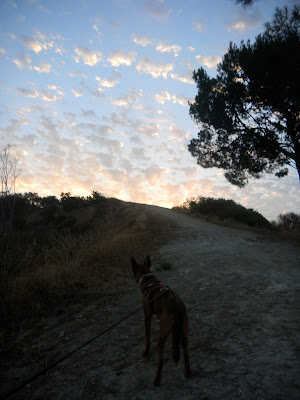 It's in the wake of loss and tragedy that we remember to hold dear the things we love.  But seizing the day isn't about remembering to hold tight to what we find precious, it's about recognizing all that is precious in front of us. 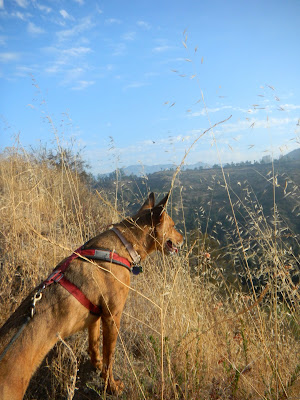 In the spirit of K, find your precious, seize your day.
Posted by AC at 2:55 PM 5 comments:

It was a toasty day here in the Southland.  Hope everyone is finding ways to stay cool this Summer.  Kona has her preference! 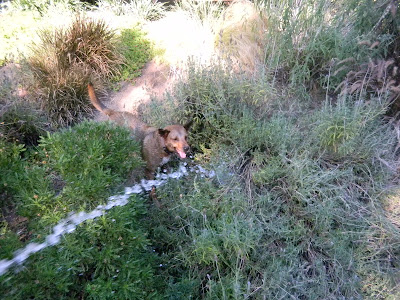 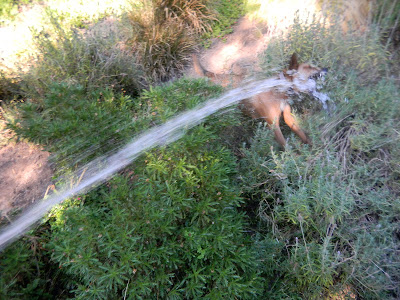 While we've been away: Up, up, and up

I felt Spring's countdown and knew it was time to tackle our local high peak.  Kona has joined me on pieces of this trail, but we'd never gone higher than the halfway point.  We wouldn't make it to the peak on this day, but the plan was to get close.

We started up the trail with a marine layer to keep the sun off the exposed trail. The first mile and a half was steep, and filled with morning exercisers.  I reminded myself that the trail would empty soon.  Kona took the stream of people in stride, perhaps better than myself.  I took my mind off my burning lung by inhaling deep whiffs of clouds. Despite several relentless climbs, the trail offered short stretches of downhill.  My legs took the breaks in effort with glee, through I reminded myself that these stretches would be uphill on the way home. 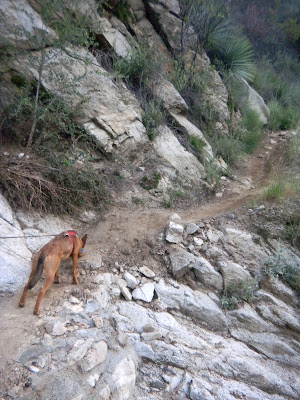 We slowly climbed out of the lower canyons, meeting the sun in a canopy of oaks and sycamores.  The trees kept me cool and housed Kona's friend, Grey Squirrel. The next mile climbed gently, making me wonder how the trail could gain 5,000 feet before the summit.  I enjoyed taking my focus off my legs to take in the sights. Just as I became relaxed with the easy terrain, the trail shot skyward.  Kona, ever the athlete, kept her pace, pulling me up toward the ridgeline.  It wasn't long before the rock elves began grabbing my toes.  After toe stubs turned into a slow motion face plant, I gave in.  I turned in my steady shuffle for  a fast hike, then a hike.  Yes, a hike was just fine. We reached our trail junction and turn around point.  We were only about a mile from the peak, but we were out of time.  My hip flexors were okay with that. I found a tree stump to perch on while Kona kept tabs on the forest below us.  I said good morning to the city below us, still draped in clouds.  Kona looked my way, letting me know it was time to get moving.  I obliged.  Down the trail we ran, keeping careful eye out for squirrels and rock elves. While we've been away

While it's breezy and cool here in the shade at 5PM, I'm still convinced that Summer is in full swing.  I've had late afternoons that required full sprawl under the fan on the wood floors because that's what Summer does.

Before all our hillsides turned to crisp and the mornings became boldly toasty for long outings, Kona and I were sure to hit our local forests.  We bid Spring adieu on some trail running adventures.

Kona knows how to take best advantage of my photo breaks. On this particular morning, we hustled past our local peak, heading further North toward a distant ridge.  Our early efforts were rewarded as the sun hadn't reached our treeless trail. 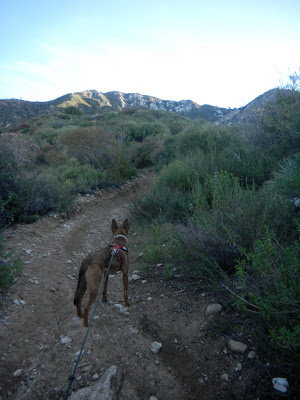 After zigging up switchbacks, and resorting to ever slower shuffling, we reached the ridge.  It's hard to see from the light contrast in the picture below, but Kona and I looked down into the moonscape of an old burn area.  This section of forest burned during the Station Fire in 2009. 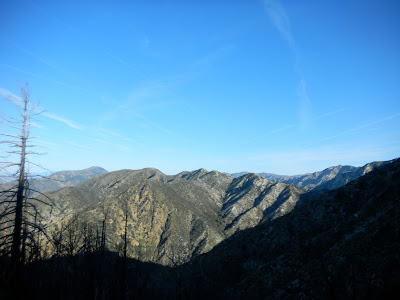 Really, I looked into the moonscape.  Kona was too busy catching the whiff of her favorite forest dweller.  Sure enough, we rounded a corned just as three doe bounded up the steep slopes.  Kona insisted that I lost Good Human Points for not letting her follow suit. 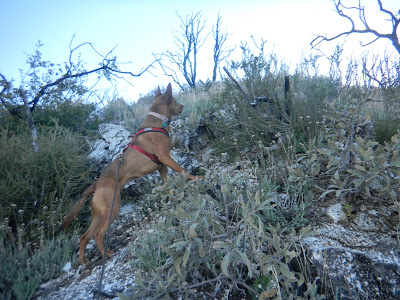 After convincing Kona that there was more to life than deer (Kona edit: there was no convincing) we rounded the trail into the South-facing forest.  The sky-stretching pines made a sharp contrast to the chaparral that accompanied our climb. 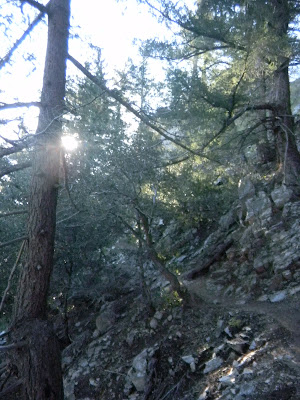 I was relieved when we made it off the forest trail, rejoining a fireroad that gave us views of the open, chaparral slope below.  Growing up around sagebrush, adventuring on granite fields in the Sierras and mesas in the high desert, leaves me claustrophobic in forests.

I trotted behind Kona on our open trail.  In was hard to believe that during the Winter, we slugged along the same trail, covered in snow. 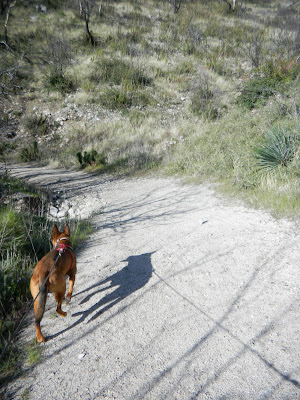 The descent home offered views of forest spared from the fires three years ago.   Kona and I shared the end of Spring, marveling at the contrasts of nature.  We'd be sure to enjoy our forest again, before Summer caught up with us. 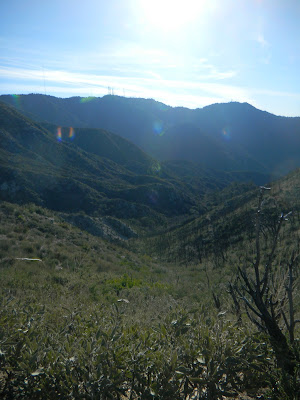 I adopted Kona as an eight week old puppy. She is my first dog and I thought raising a puppy would allow me to avoid major behavioral problems. Kona had other plans for me. Even at ten weeks old, she barked at strangers. I wanted a dog that I could take anywhere, but Kona shook when I took her in the yard.

Because Kona was too afraid of the activity on the streets, I took her into the foothills. Now, she's my trail running partner and we're becoming a team.

She has come a long way, but she still has a long way to go. I'm slowly learning how to help her get there. And as we work to make the world less scary, we take time to relax on our trails.

AC
I run with my mutt, Kona, in the foothills of Los Angeles.